This week in the Liturgical Life of the Church… 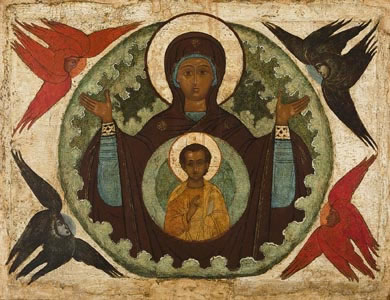 The Road to the Incarnation

Saint Ephraim the Syrian – Hymn 1 On the Nativity

This is the day that gladdened them, the Prophets, Kings, and Priests, for in it were their words fulfilled, and thus were the whole of them indeed performed! For the Virgin this day brought forth Immanuel in Bethlehem. The voice that of old Isaiah spoke, Isaiah 10:19 today became reality. He was born there who in writing should tell the Gentiles’ number! The Psalm that David once sang, by its fulfilment came today! The word that Micah once spoke, Micah 5:2 today had come indeed to pass! For there came from Ephrata a Shepherd, and His staff swayed over souls. Lo! From Jacob shone the Star, Numbers 24:17 and from Israel rose the Head. Hosea 1:11 The prophecy that Balaam spoke had its interpreting today! Down also came the hidden Light, and from the Body rose His beauty! The light that spoke in Zachary, today shined in Bethlehem!

Risen is the Light of the kingdom, in Ephrata the city of the King. The blessing wherewith Jacob blessed, to its fulfilment came today! That tree likewise, [the tree] of life, brings hope to mortal men! Solomon’s hidden proverb Proverbs 3:18 had today its explanation! Today was born the Child, and His name was called Wonder! Isaiah 9:6 For a wonder it is that God as a Babe should show Himself. By the word Worm did the Spirit foreshow Him in parable, because His generation was without marriage. The type that the Holy Ghost figured today its meaning was [explained.] He came up as a root before Him, as a root of parched ground. Isaiah 53:2 Anything that covertly was said, openly today was done! The King that in Judah was hidden, Thamar stole Him from his thigh; today arose His conquering beauty, which in hidden estate she loved. Ruth at Boaz’ side lay down, because the Medicine of Life hidden in him she perceived. Today was fulfilled her vow, since from her seed arose the Quickener of all. Travail Adam on the woman brought, that from him had come forth. She today her travail ransomed, who to her a Saviour bare! To Eve our mother a man gave birth, who himself had had no birth. How much more should Eve’s daughter be believed to have borne a Child without a man! The virgin earth, she bare that Adam that was head over the earth! The Virgin bare today the Adam that was Head over the Heavens. The staff of Aaron, it budded, and the dry wood yielded fruit! Its mystery is cleared up today, for the virgin womb a Child has borne!